Toyota India recently revealed the Urban Cruiser Hyryder SUV on the 1st of July 2022. The mid-size SUV is to be co-developed with Maruti Suzuki; First strong hybrid SUV in its segment

Toyota Kirloskar Motors India recently took off the wraps of its contender for the mid-size SUV segment. The Urban Cruiser Hyryder surely grabs a lot of eyeballs, given its distinct styling. Here is a quick run through of the ‘Top 7 Things To Know About’ the Toyota Hyryder.

The Hyryder sports a unique exterior styling which is quite modern. The front fascia features a crystal acrylic upper grille with twin LED DRLs neatly flowing into it. The LED headlamp cluster is placed separately in the lower half of the bumper along with a wide trapezoidal lower grille. Moving towards the sides, the vehicle provides 17-inch alloy wheels and a hybrid badge on each front door. At the rear, the four-wheeler is characterised by C-shaped LED tail lamps flowing over to the sides, along with a sporty rear skid plate at the bottom. 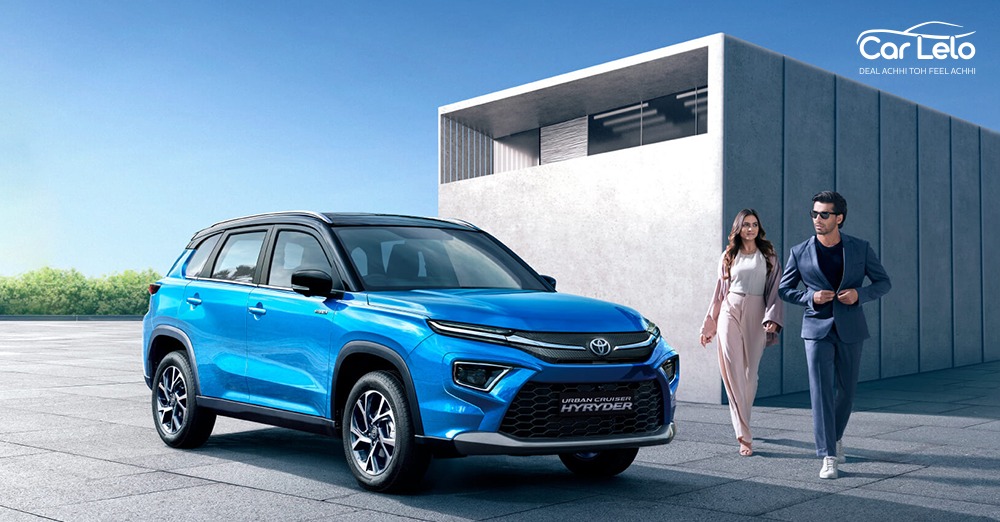 The interiors of the Hyryder tries to portray an upmarket and sophisticated feel with the dashboard finished in dual tone black and brown leather. The company has tastefully used chrome all around to enhance the overall luxurious appeal of the cabin. Despite all its efforts, the four-wheeler is a let down by the dashboard and centre console design as it is borrowed from cheaper Maruti cars like the Brezza and Baleno. The steering wheel too is a straight lift off from the Maruti Suzuki cars. 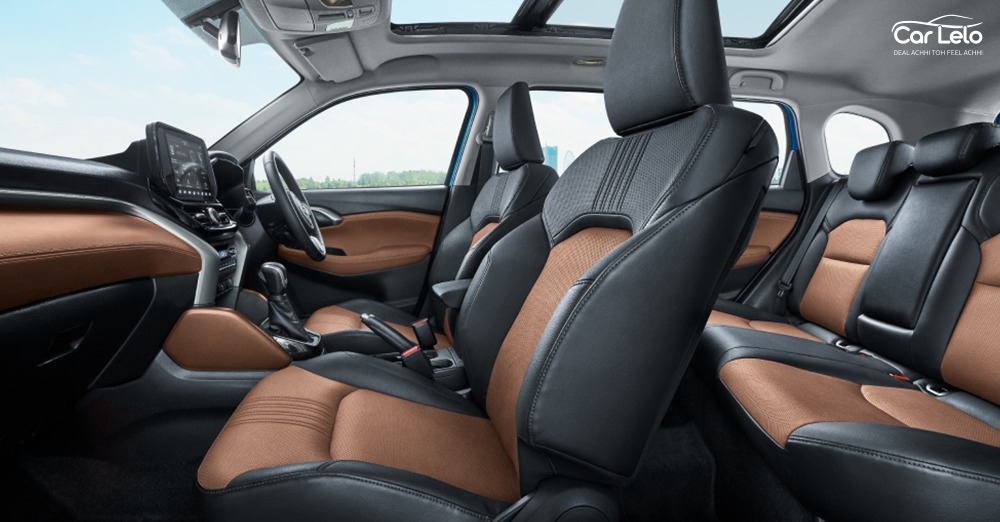 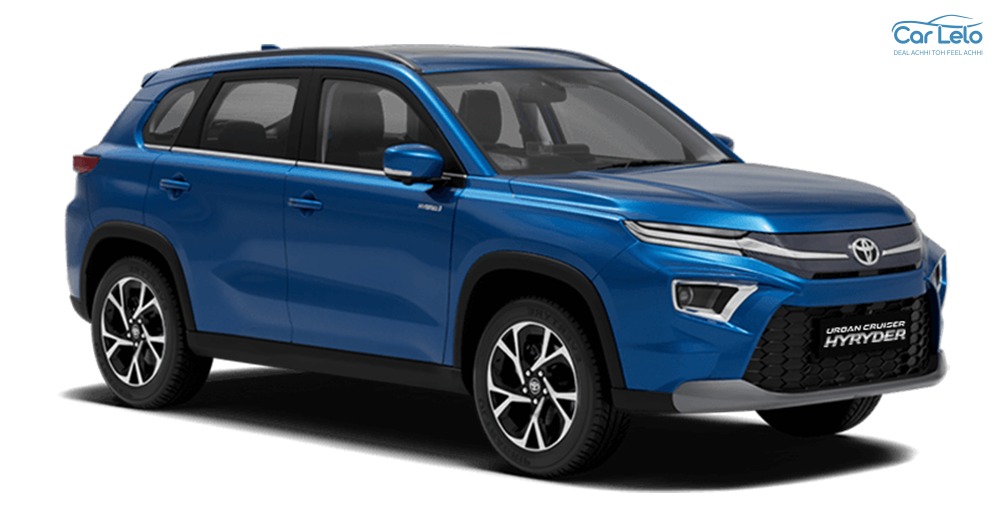 Being a Toyota product, safety takes the driver’s seat in the making of a vehicle and the Hyryder is no different. The four-wheeler gets all the latest safety features like 6 airbags, Hill Hold Control, Vehicle Stability Control, 4-disc brakes, TPMS and rear 3-point seat belts. 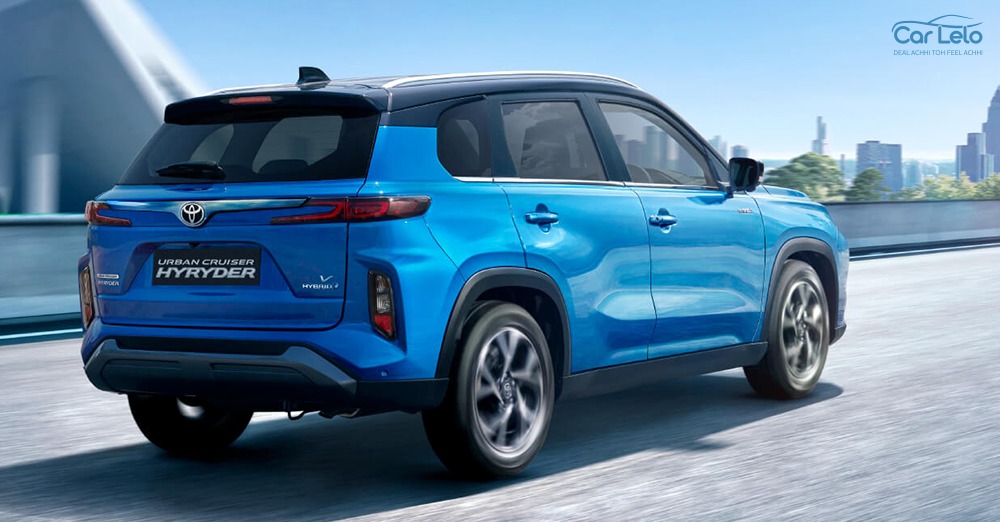 It will be offered in 4 trim levels namely E, S, G and V. These variants are available with two engine options called the Neo Drive and the Hybrid. The Neo Drive line-up gets a mild-hybrid setup and is offered in all 4 variants. On the other hand, the Hybrid range starts from the S variant with one gearbox option. 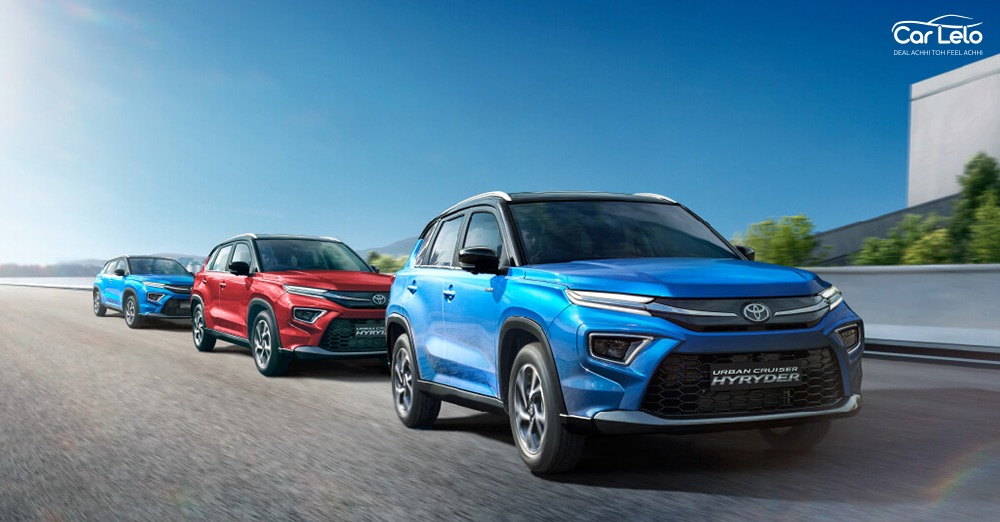 The compact SUV will be available with two engine options. The first is the 1.5-litre 3- cylinder TNGA Atkinson cycle engine paired to an electric motor producing a combined power output of 115bhp. The electric motor makes use of the 177.6 V lithium-ion battery pack and the set-up is mated to the Toyota’s e-Drive gearbox. The less expensive option will be the 1.5-litre K15C petrol motor with an ISG mild hybrid system called the Neo Drive. It would produce 103bhp and 137 Nm of peak torque and will be equipped either a 5-speed manual or a 6-speed automatic transmission with paddle shifters.

The Japanese carmaker has claimed that the hybrid SUV will offer 40 percent higher fuel efficiency compared to its competition with a claimed economy of around 26 kmpl. The SUV also gets a segment-first AWD set-up available with the smart hybrid setup and a manual gearbox.

Once launched, the Hyryder will lock horns with the likes of the Kia Seltos, Hyundai Creta, Volkswagen Taigun, Skoda Kushaq and MG Astor in its segment. As for the expected price, we expect the carmaker to bring very competitive pricing for the Neo Drive mild-hybrid grade, starting from around Rs 10.50 lakh, while the prices for the strong hybrid powertrain will be around the Rs 18 to Rs 20 lakh bracket.